If you could bottle up nostalgia and sell it then we reckon the bottle would be shaped like an Alfa Romeo. Jeremy Clarkson famously once said that you are not a true petrolhead until you have owned an Alfa Romeo. Being one of the most talked about journalists on the planet we are not ones to disagree with him, in fact we have owned four ourselves just to be sure. Yes the 80’s/90’s Italian cars of nostalgia rusted and were not overly reliable but that still doesn’t stop some of you owning and enjoying them.

Alfa Romeo was one of the few manufacturers to take on the flat four, boxer engine in a number of their models. The unusual piston layout is often related to the infamous Subaru rally cars of the 90’s and early 00’s, but Alfa were putting an NA boxer in their cars prior to the iconic flat four turbo that Subaru produced. In 1971 the AlfaSud was born, firstly as the Berlina and later as the Sprint, ending production after 18 years in 1989. The hatchbacks were light and nimble and it could be argued that the Ti 2 door was at the forefront of the hot hatch era along with the likes of the Mk1 Golf GTi. All the Suds sported a flat four in various forms from a 1.2 up to a 1.5 all on carbs with either a 4 or 5 speed manual. The AlfaSud was reasonably advanced for its time leaving the factory with discs all rounds, MacPherson strut front suspension and that flat four keeping the centre of gravity low and light on the front end. According to how many left, there around 76 AlfaSud hatchbacks currently registered on Uk roads, however we reckon there must be less. Being such a rare vehicle it’s not often you see them gracing UK circuits so when we had the chance to shoot Adams S3, black ex-competition car we jumped at the opportunity.

The particular car has been in the family since 2002. Having been a previous Class F Alfa Championship car, Lewis and his father Adam are regulars at our events and often bring two Alfas with them. This stunning AlfaSud and a full race spec S1 33 which we hope to feature once it has had restorations completed. Adam even has a later Subaru Impreza to make up a trio of flat fours in the family.

This particular Alfasud has spent much of its time as a competition or track car. In its early days it was introduced to hill climbs and sprints and it is now regularly used on trackdays every season. It was even had a small write up in Car & Car Conversions all the way back in 1993. We tip our hat to anyone who uses an older, more unusual car simply because getting mechanical parts and body panels can be one hell of a task on its own when things do go wrong. Many would describe the look of this hot hatch as OEM+ or for those that are hip possibly club sport spec. The lack of any plastic or metal bumpers gives this car a sleek look. Whilst the factory iconic pepper pots wrapped in extra wide Dunlop semi slicks give you the nudge that this is no ordinary Alfa. The only other nudge to motorsport from the outside are the inner front lights which have been replaced with ducting for engine cooling which adds an extra amount of anger to the front end. The car was initially restored in 2010 by Adam and Lewis and they have done a fantastic job. 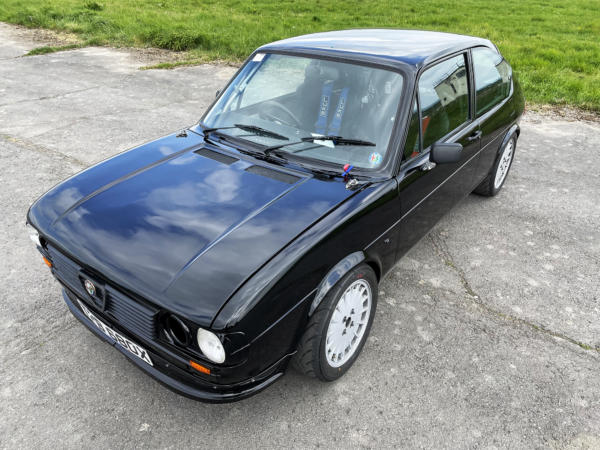 As you would imagine from an 80’s hatch back the interior is sparse and simple. A period, bolt in roll cage mounted inside with bucket seats and harnesses to keep the occupants safe during any octane filled activities. The lack of interior helps the car sit around the featherweight 800kg mark and with the twin carb 1.5 flat four only producing around 145bhp it needs the lack of weight to produce its pace on track. Those who started driving prior to the boom of financed, high power cars for youngsters will remember that if you were running a car close to 150bhp you were the man of the moment amongst your petrolhead friends, but these days turbo 3 pots have replaced mid hundred bhp boxy hatch backs from the 80’s and 90’s. Despite modern cars having far more power this little Italian regularly pushes along more powerful machinery on track. 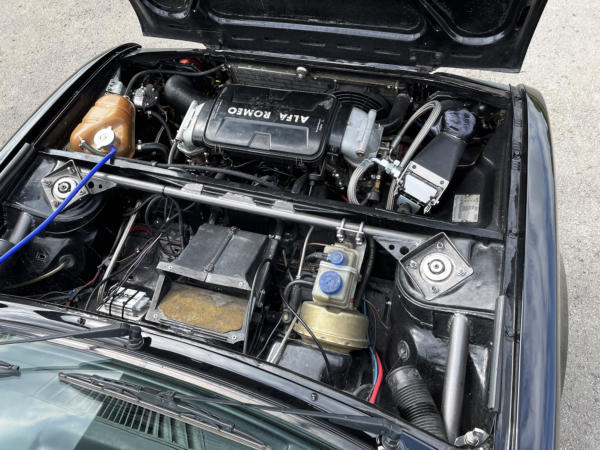